Come along with me as I share with you what might be one of my most embarrassing moments ever. It wasn’t funny then, but now I see the hilarity in this “Special” story and would like to give you all an extra special glimpse into my life. Everyone has bad days, right? Sure! Well, remember that, alright. Oh, yeah, one more thing, I dare you NOT to laugh.

This isn’t a story about me quitting my job and flipping out on my co-workers. Although, it did get a little Jerry Maguire-esque. I came completely unhinged!

In college, I was lucky enough to land a teaching internship in the Philosophy Dept., Contemporary Moral Problems AKA Intro to Ethics. I was overjoyed! It was challenging finding the balance between teaching and my classes, but I loved it. After a class, my face would be sore from smiling and laughing so hard. It was October and things were intense. Apparently, so was I. My sleep was almost non-existent, 3-4 hrs. a night. You know those days where you just can’t win? This was one of those. Nothing went right from the moment I woke up, it was one thing after another.

I walked into the classroom frazzled, making a graceful entrance in front of 20+ freshmen, dropping handouts all over the floor. Memorable. I make it to the desk and say good morning. Went to take a sip of coffee, missed my mouth, which went down the front of my WHITE shirt. I shouted, “DAMNIT! Oh God, I’m so sorry! 😣 Ugh…Ok, everybody let’s just get started.” I pulled my shirt away from my skin and thought when will I learn? I can’t wear white or khaki anything. Went to write on the board, every SINGLE dry erase marker was dried out. Ggggrrrrreat! I slammed the last one down on the ledge. I took a deep breath, plastered a BIG smile on my face, and turned around.

Me: ALRIGHTY. Never mind. Questions. Anyone? We’ve got an exam tomorrow. (Nothing. Crickets.)

There was a guy too cool to pick up a pencil, he’d slouch back the entire time. There’s always one. One student that is a smart-ass ALL the time, never raises their hand, talks during the lecture. RUDE.

Me: It’s Mill. John Stuart Mill. You might want to write that down. Mill is a Utilitarian and he actually licks women a lot. LIKES! LIKES women! (Yeah, licks—not likes. Cue boisterous laughter. I turned red with embarrassment, recovered, and gave an explanation.)

Same Student: Uh, I don’t know, still sounds wrong. Maybe you should check with a REAL professor. Even though you’re a total TILF (Teacher I’d Like to…) 🙄 He starts high-fiving his friends and laughing.

Me: LOOK, Stifler! You and your little buddies should just leave the class. Some of us are here to learn.

Same Student: Sure thing. Miss Lowe. (Winking and making a kissing noise as he walked past.)

They leave laughing and the little punks didn’t shut the door. So, I went and did so a little too forcefully. Somehow, I close it on my pants, which ripped and almost made me wipe out in front of the entire class.

Me: Hahahaha, whew! That was a close one, huh? Bad day to wear heels. Am I right, ladies? (Not a peep)

I’m thinking…Seriously?! Seriously?! I get back to the podium, close my eyes, look down, pressing in between them for a few seconds, then I hear a shaky timid voice. I look up and there’s a girl in the front row with her hand up. I don’t open my mouth, just point in acknowledgment and hum, “Mmm hmm.”

Student: Miss Lowe…it looks like you’re umm…having a really bad day…or something and you look umm REALLY tired, but the test is tomorrow. So…

Me: Hahaha, yeah, it hasn’t been the best of mornings. Let’s learn something, shall we? You can put your hand down now. (Smiling, thinking: Thanks for stating the obvious, you little Hermione Granger Twerp!)

I commence to deliver a damned good lecture, the Reader’s Digest version, but one I’ve given dozens of times. At a glance: Someone is playing on their phone, another tapping their pencil on the desk, lots of blank vacant stares.

Me: So, what do we know? (Silence) Ethics is an important branch of Philosophy that can be applied to life in a number of ways. Does anyone remember how many main theories we covered? Anybody? (I’m feeling VERY Bueller, Bueller, Bueller, except I wasn’t laughing.)

Student: His hand goes up as he says reluctantly, There’s 4, I think. Cant. Cant’s Demonology, that’s one.

Me: Fighting the urge to bang my head up against the wall. I shake my head and say, no, no, there’s 3, it’s pronounced Kahnt, it’s Kant’s De-on-tology, he came up with The Categorical Imperative.

Reluctant Student: Raises his hand and asks, But he still believed in demons, right?

Me: I’m slowly losing the will to live. I reply, wide-eyed. No. He didn’t. We have literally never even used the word demon in this classroom. Who is the most well-known contemporary Utilitarian? Anyone? (Still, all quiet on the western front. I try NOT roll my eyes and sigh.) Come on, this is an easy one! Peter Singer. It’s Peter Singer!!!

They’re all staring at me like I’m crazy. Let’s face it, I had gone a little crazy but I just kept on going…here’s where the first hinge comes loose…

Okay, listen up! We are here to learn, whether you want to or not. So, put your phones away, get out some paper and a pen or pencil and take some notes. Or, I don’t know LOOK AT THE STUDY GUIDE! It’s ALL THERE, people. It IS correct, I promise. (Putting my right hand up as if I were swearing on a bible.) EVERY. THING. IS ON THE STUDY GUIDE. USE IT!

Here comes hinge number two…I know you all know this stuff! You know that over the last 2,500 years, philosophers have 3 main theories on ethics. Aristotle’s Virtue Ethics, John Stuart Mill’s Utilitarianism, and Immanuel KANT’S Deontology. BUT—Here’s what’s up, you guys! All 3 of those theories are…they are—BULLSHIT! MMM HMM! That’s right! Because the ethical system y’all should follow is NIHILISM! The world is empty and there’s really no point to anything. Basically, life sucks and then, you die. So, do whatever you want. K? OKAY. NOW. If you have any further questions, email me.

Nervous Hermione: I don’t see that on the study guide. Is that gonna be on the test?

Me: OH. MY. GAWD. I think, as I silently stare at her in disbelief. Yes, no, maybe. And you’re all going to get a grade. And there’s not really a test in this dimension of reality. But who cares? NIHILISM! Remember?! Class Dismissed. Goodbye, Goodbye, Goodbyyyyye!!!

I walked down the hall feeling completely defeated and exhausted. The head of the Philosophy Dept. came up and patted me on the back laughing, “Miss Lowe, it’s going to be ok. You wouldn’t be a true philosopher without having an existential crisis. Although, most write about their’s instead of giving a public recitation. Carry on.” 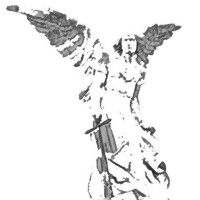 Spiritual Moments in the Human Experience

News and views to inform or amuse

Visit my active site at www.peppervalentine.com

The Magpie at Midnight

A personal exploration of autism from a brother’s perspective, including family relationships, philosophy, neuroscience, mental health history and ethics

Format your brain for knowledge transfer

The Musings of a Writer / Freelance Editor in Training

Creativity for a Lifetime
down the creative lane
Paolo Belcastro

meditations on home, belonging & all things literary
The Unnecessary Blog

Croning My Way Through Life